Two workers who became trapped at the top of the Hearst Building in New York City were rescued without injury Wednesday afternoon.

Rescue crews from the New York City fire department arrived around 2:40 p.m. Wednesday to help two window washers who became suspended on the 44th floor after the metal scaffolding they were standing on buckled and gave way. 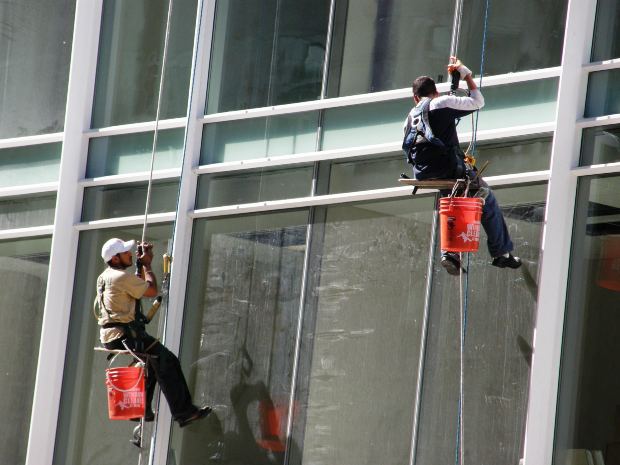 According to officials, firefighters worked from both the roof and from a window on the 44th floor (which was level with the scaffold platform) to reach the two men. Firefighters eventually cut a 4-foot-by-4-foot panel of glass from the window and pulled the workers to safety. The men, ages 26 and 49, were both wearing safety harnesses, and neither was injured. Firefighters were also able to pull the scaffolding up to the roof, where they determined that it was the scaffolding’s motor that had failed and thus caused the incident.

Scaffolding is used as a temporary platform that is used to help build, install, repair, or reach any surface that cannot be reached by ladder. Scaffolding incidents can occur for a number of reasons including incorrect assembly and improper manufacturing. Accidents can also happen when supports fail or collapse, when scaffolding is broken, scaffolding is wet and a worker slips and falls, or when workers are inadequately trained on how to operate equipment.

Due to the height of scaffolding, injuries sustained during scaffolding incidents are often serious and sometimes fatal. Injuries might include fractures, head injuries, broken bones, or spinal trauma that could lead to paralysis or death.

Approximately 2.3 million men and women or 65% of those in the construction industry work on scaffolds in the United States. Protecting workers on construction sites where scaffolding is commonly used may prevent an estimated 4,500 injuries and 60 deaths each year, according to the Occupational Safety and Health Administration (OSHA). Employers are solely responsible for making sure workplaces and construction sites are free of potentially dangerous conditions and are liable in the event an employee is injured while on their premises.

In addition to the physical injuries a worker may sustain in a scaffolding accident, victims and their families must also cope with a great deal of emotional and financial stress. Costs associated with a work injury can include medical bills, lost wages, and psychological care. If you or a loved one was the victim of a scaffolding incident, contact one of our experienced Boston Workers’ Compensation Attorneys for a free confidential consultation. Our attorneys have the experience and resources to help you receive the compensation you deserve, and we stand ready to help you navigate through every part of your case.